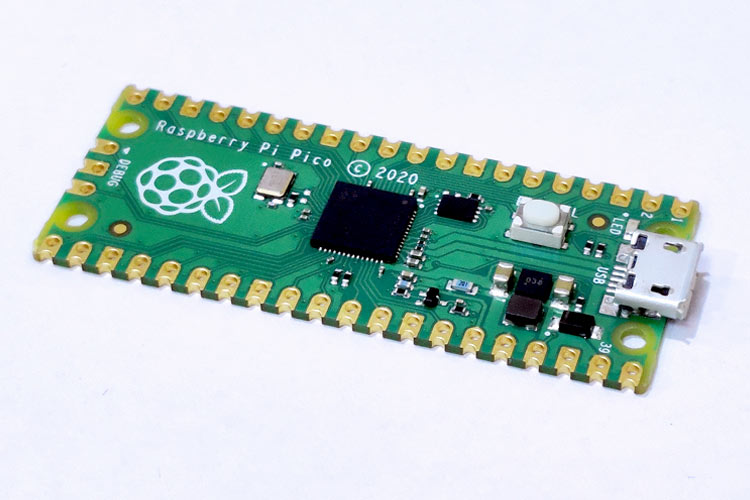 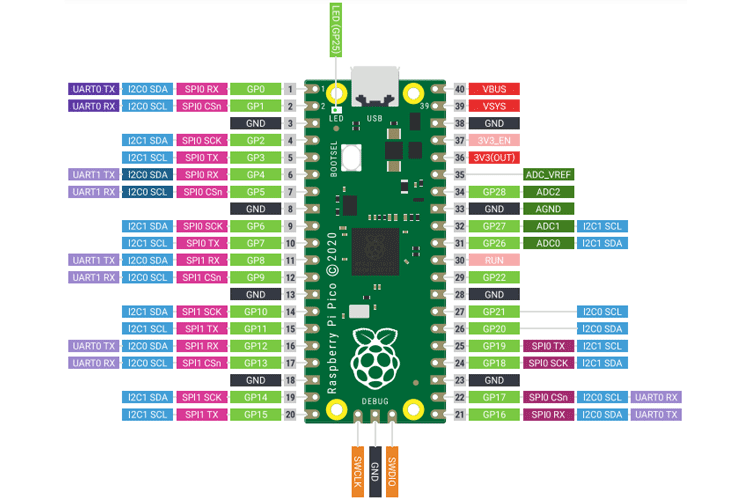 If you are into IoT, robotics, or automation, then there are good chances that you must have heard about the latest revelation from the Raspberry Pi foundation, i.e. the Pi Pico. If not, then allow me to introduce you the microcontroller board, YES, you read it right, A Microcontroller!!! Pi Pico is the first microcontroller from the manufacturers of Raspberry Pi, based on the Raspberry Pi’s RP2040 microcontroller chip and working on ARM’s Dual-core cortex M0+ architecture. It works at frequencies up to 133MHz and albeit looking powerless when compared to the other members of the Pi family it has a lot to offer. Unlike the other Pi boards which are basically a Linux based single board computer, Pico is a budget friendly microcontroller with 264kB multi-bank high-performance SRAM, 16 kb of on-chip cache, and 2MB of flash storage. It is actually an amazing board considering how affordable this board is, priced at just USD 4 (around INR 300 in Indian market) it is competing directly against the likes of established Arduino boards, blowing them out of water in terms of power and speed when competed against the similarly priced modules.

Raspberry Pi Pico has a total of 40 input and output pins out of which 26 are multipurpose GPIOs operating at 3.3V and 8 ground pins. Apart from these pins, it also has 3 pins for debugging. The below image taken from the official datasheet of Raspberry Pi Pico illustrates the layout of all the pins. 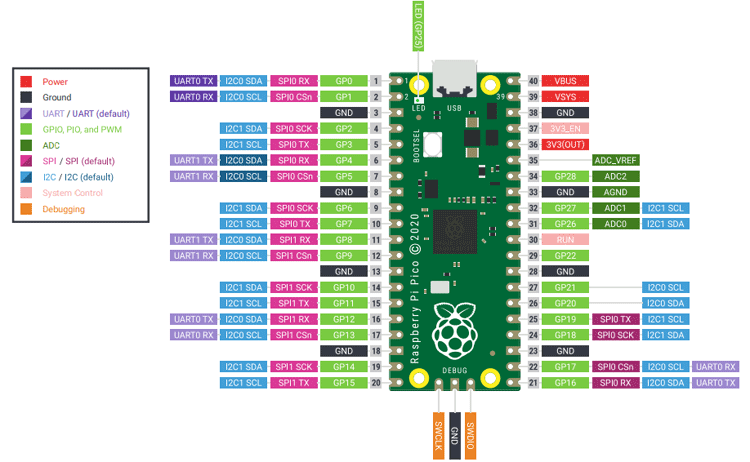 The Raspberry Pi only utilises 26 out of 30 GPIOs the RP2040 has to offer, 26 pins are exposed and an additional 27th pin can only be used for the onboard LED. The Raspberry Pi Pico’s GPIO is powered from the on-board 3.3V rail and is therefore fixed at 3.3V. GPIO0 to GPIO22 are digital only and GPIO 26-28 are able to be used either as digital GPIO or as an ADC input which can be done through software.

The communication options this board has to offer are:

Power pins are used for either powering the pico from the power source or power the sensors and peripherals from the pico.

The Pi Pico can either be powered through a USB cable(via VBUS) or through a battery or other sources(via VSYS), when both the inputs are connected together, the input with higher potential supplies the power. For connecting 2 sources you need to connect it to VSYS in series with a Schottky diode.

There are 2 kinds of ground pins in the board, a digital ground and a ground pin for analog IO. The differences are given below-

Looking closely at the board, you will realize that all the ground pins have squared-off copper pads compared to the semi-circular pads for any other pins. Pin 33 acts as both a GND as well as the AGND.

These points are used during the manufacturing process to test the boards. These are only visible at the rare side of the board.

These pins can be used for purposes such as if the board is used as surface mount modules. TP1, TP2, and TP3 can be used in place of micro-USB. TP6 can be used to drive the system into mass-storage USB programming mode (by shorting it low at power-up). TP4 and TP5 are not intended to be used at all.

It has an additional pin called the Run.

The following are some of the important specifications of the Pico board that you might want to know. If you want more information, you can always refer to the Raspberry pi pico datasheet linked at the bottom of this page.

The most optimum operating conditions for the board by the manufacturers are listed down:

The board comes in a DIP package with a thickness of 1mm and sides as 21mm and 51mm for it’s width and length, respectively. All the dimensions of the board are illustrated in the image below.

The latest board from the Raspberry Pi Foundation is surely a game-changer, the microcontroller is a lucrative option for beginners and seasoned engineers alike. It is a great product and with an asking price of just $4 is a bang for your buck.

How to change my password in my profile at components101.com ??

Comment
How do I change my password? What am I doing wrong? Please tell me. Thank you.

Comment
How do I change my password? What am I doing wrong? Need your help. Thank you.

Comment
Please tell me how to answer an existing topic? Maybe I'm not writing correctly? Please help. Thank you.

It is the valuable information

I congratulate, remarkable idea and it is duly

Comment
I consider, that you commit an error. I can defend the position. Write to me in PM, we will communicate.

Comment
Want to post your links to 12.000.000 (12 MILLIONS!) websites? No problem - with new "XEvil 5.0 + XRumer 19.0.8" software complex! Blogs, forums, boards, shops, guestbooks, social networks - any engines with any captchas! XEvil also compatible with any SEO/SMM programms and scripts, and can accept captchas from any source. Just try it! ;) Regards, MariaDex P.S. New XEvil 6.0 will break hCaptcha, FunCaptcha and ReCaptcha Enterprize

This version has become outdated

Comment
Want to post your text to 12.000.000 (12 MILLIONS!) websites? No problem - with new "XEvil 5.0 + XRumer 19.0.8" software complex! Blogs, forums, boards, shops, guestbooks, social networks - any engines with any captchas! XEvil also compatible with any SEO/SMM programms and scripts, and can accept captchas from any source. Just try it! ;) Regards, MariaDex P.S. New XEvil 6.0 will solve hCaptcha, FunCaptcha and ReCaptcha Enterprize

It is simply magnificent phrase

Comment
In my opinion you are not right. Let's discuss it. Write to me in PM, we will communicate.

hello. topic for me thanks

Comment
hello. topic for me thanks kelly i found this web and i would to help you with evolution. i am from UAE ;D

Comment
Welcome to the world of adult Dating loveawake.ru

Comment
Welcome to the world of adult Dating loveawake.ru